Last Saturday, Ryan McGuire, Director of Recruitment and Community Relations for the San Antonio office of Griswold Home Care, and his son participated in the local Walk to End Alzheimer’s. The weather forecast looked ominous for most of the week but Saturday morning they were blessed with cool weather and no rain!  It was a great experience and a fantastic reminder of the need to support Alzheimer’s caregivers and those living with Alzheimer’s. 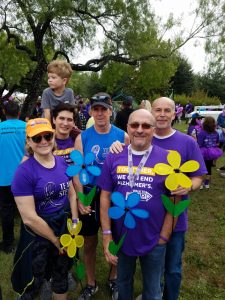 Ryan volunteers at the local chapter of the Alzheimer’s Association.  He has the great privilege of facilitating the only early stage support group in San Antonio. The support group includes a session for the Alzheimer’s caregivers and their loved ones with an Alzheimer’s diagnosis. Over the last several months they have met weekly and discussed the diseases progression and loved one’s decline. In some instances families are observing increased challenges with word recall, keeping track of dates or overall loss of independence. No matter what current behaviors they are experiencing, there are a few sentiments felt by all –  a feeling of loss for the person they were and the thought that this is not the life they planned. 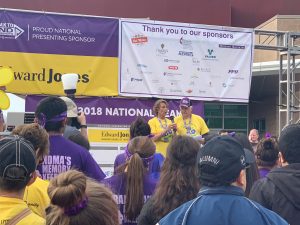 Several of the support group Alzheimer’s caregivers played very important roles in the Walk to End Alzheimer’s on Saturday. Some of the caregivers had speaking roles, some volunteered to help organize and others showed up with their families to gather resources and show support. No matter what role each played, as the MC, KENS 5’s Bill Taylor proclaimed, Saturday was their day to punch back! The event raised over $526,000 as of Tuesday morning. But more importantly it united everyone touched by the disease as one. It gave hope and inspiration to all of those living with Alzheimer’s and their families. Ryan and his son were personally inspired and happy to be able to do their part in the fight.

The Early Stage Alzheimer’s support group usually takes place in 8 week sessions.  After the end of each session  there is a one week break and then the group reconvenes for another session. The unique aspect of the group is that it brings together family caregivers and their loved ones living with the Alzheimer’s diagnosis. During the session the family caregivers meet in one room and the ones living with Alzheimer’s meet in a separate room. Each group can discuss relevant topics and resources.  We understand that each role is going through equally difficult yet very different circumstances. 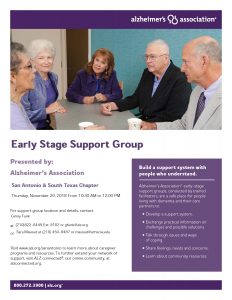 If you are interested in joining the early stage support group. You should contact Ginny Funk, Director of Programs & Advocacy at the Alzheimer’s Association, Direct office line: 210-634-0110.